The Doge's Palace is a palace built in Venetian Gothic style, and one of the main landmarks of the city of Venice. The palace was the residence of the Doge of Venice, the supreme authority of the former Republic. It was built in 1340 and extended and modified in the following centuries. It became a museum in 1923 and is one of the 11 museums run by the Fondazione Musei Civici di Venezia.

In 810, Doge Agnello Participazio moved the seat of government from the island of Malamocco to the area of the present-day Rialto, when it was decided a palatium duci (Latin for "ducal palace") should be built. However, no trace remains of that 9th-century building as the palace was partially destroyed in the 10th century by a fire.

Reconstruction works were undertaken by Doge Sebastiano Ziani (1172–1178). A great reformer, he would drastically change the entire layout of the St. Mark's Square. The new palace was built out of fortresses, one façade to the Piazzetta, the other overlooking the St. Mark's Basin. Although only few traces remain of that palace, some Byzantine-Venetian architecture characteristics can still be seen at the ground floor, with the wall base in Istrian stone and some herring-bone pattern brick paving.

Political changes in the mid-13th century led to the need to re-think the palace's structure due to the increase in the number of the Great Council's members. The new Gothic palace's constructions started around 1340, focusing mostly on the side of the building facing the lagoon.

The oldest part of the palace is the wing overlooking the lagoon, the corners of which are decorated with 14th-century sculptures, thought to be by Filippo Calendario and various Lombard artists such as Matteo Raverti and Antonio Bregno. The ground floor arcade and the loggia above are decorated with 14th- and 15th-century capitals, some of which were replaced with copies during the 19th century.

A corridor leads over the Bridge of Sighs, built in 1614 to link the Doge's Palace to the structure intended to house the New Prisons. Enclosed and covered on all sides, the bridge contains two separate corridors that run next to each other. Both corridors are linked to the service staircase that leads from the ground floor cells of the Pozzi to the roof cells of the Piombi.

The famous name of the bridge dates from the Romantic period and was supposed to refer to the sighs of prisoners who, passing from the courtroom to the cell in which they would serve their sentence, took a last look at freedom as they glimpsed the lagoon and San Giorgio through the small windows.

In the mid-16th century, it was decided to build a new structure on the other side of the canal to the side of the palace which would house prisons and the chambers of the magistrates known as the Notte al Criminal. Ultimately linked to the palace by the Bridge of Sighs, the building was intended to improve the conditions for prisoners with larger and more light-filled and airy cells. 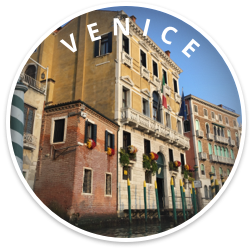