Castello Sforzesco was built in 1450 by Francesco Sforza. Francesco was an Italian military leader and the Duke of Milan from 1450 until his death in 1466. When construction was complete, Francesco used it as his home.

In 1494, Francesco's son Ludovico Sforza became Lord of Milan. He, along with his wife Beatrice d'Este, would host large festivals and gatherings at the castle. Beatrice d'Este belonged to the highest class of Renaissance women and her great taste for the arts could be seen in the paintings and decorations throughout the caste. They hired many of the best artists of the time including Leonardo da Vinci, who painted the frescoed ceiling of the "Sala delle Asse."

In 1526, the Treaty of Madrid gave Spain parts of Italy. During this time, the Spanish converted the castle into a citadel (a fortress). There were about 1000 to 3000 men assigned here. The Spanish improved the fortification and expanded the length of the surrounding walls.

Most of the castle was demolished during the period of Napoleonic rule. Around this same time, both Piazza Castello and Piazza d'Armi were constructed.

When Italy united in the 19th century, the castle was no longer used by the military. It was used by the city instead. In 1880, the Via Dante was built to connect the castle with the Duomo. The central tower, Tower Filarete, was rebuilt based on 16th centrury drawings and dedicated to King Umberto I.

Allied bombings in 1943 (World War II) severely damaged the castle. After the war, it was rebuilt and used as a museum.

Before Castello Sforzesco, Castello di Porta Giova stood in this location in the 14th century. It was destroyed around 1447 leading to the construction of the new castle. 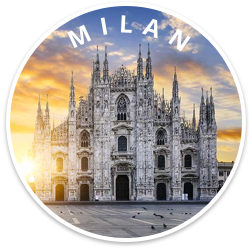