The Leaning Tower of Pisa was built in 1173 and completed many years later in 1392. It took over 200 years to build because of wars and, at times, a lack of money.

Four architects and engineers were responsible for building it. The Leaning Tower of Pisa got its name because of how much it leans. It started tilting to one side during its construction due to the soft ground it is built on. The city’s name Pisa even translates to mean “marshy land”.

Throughout its construction, the builders tried to straighten it but their attempts failed. The ground was just too soft. It is believed that the only reason it didn’t topple over during construction was because the building delays gave it a chance to settle. Some of the other tall buildings nearby lean too.

The tower is about 60 meters tall and has 296 steps going up to the top. It was one of the first circular buildings of its time. It weighs 15,000 tons. There are seven bells In the tower that are rung for different occasions.

Construction of the tower was stopped for almost 100 years due to war.

The tower used to lean more than it does today. Restoration work was completed in 2001 that adjusted the towers lean from 5.5 degrees to just under 4 degrees.

The tower was built as a free standing bell tower for the nearby cathedral. 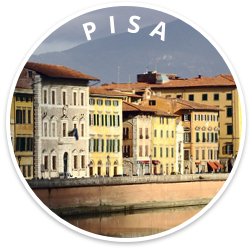 This ancient port city is famous for its leaning bell tower.