Palazzo Vecchio is a beautiful building that overlooks the gallery of statues. From here, you can see the Piazza della Signoria, an “L” shaped square that holds the statue that Michelangelo created of David.

The people who lived in Florence had the idea to build the palace in 1299. They wanted it to be the symbol of power for their city. They placed it right above the ruins of the Uberti Ghibelline towers where they had a very important victory over the Guelph faction.

The Palazzo Vecchio is built on top of an ancient Roman theater that was once part of the Roman colony of Florentia. You can purchase tickets to view the underground ruins.

Inside the Palazzo, there are many famous paintings. A microcosm in the palace keeps art and history safe for visitors to enjoy. A massive hall named Salone dei Cinquecento was built in 1494. It has paneled ceilings and walls decorated with frescoes, gold, and large statues. Leonardo da Vinci and Michelangelo Buonarroti painted the two large murals on the walls. Unfortunately, the work of these great artists was never completed.

Michelangelo never finished the painting because he was called by Pope Julius II to Rome to paint the Sistine Chapel.

Da Vinici's work was destroyed in the process of painting the wall. He was experimenting with different painting processes which mixed wax with the paint pigments. In an attempt to speed up the drying time, he used a coal fire to heat the room. The heat from the fire melted the wax off the walls ruining the painting. 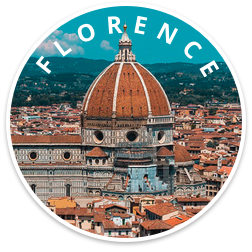 Soak in the beauty of the architecture and history of the capital of the Tuscany region.