The Sydney Harbour Bridge is a through arch bridge across Sydney Harbour that carries trains, cars, bicycles, and pedestrian traffic between the Sydney central business district and the North Shore. The view of the bridge, the harbour, and the nearby Sydney Opera House is widely regarded as an iconic image of Sydney, and of Australia itself. The bridge is nicknamed "The Coathanger" because of its arch-based design.

It was designed based on the Tyne Bridge in Newcastle and opened in 1932. Todya, it is the eighth longest spanning-arch bridge in the world and the tallest steel arch bridge, measuring 134 m (440 ft) from top to water level. It was also the world's widest long-span bridge, at 48.8 m (160 ft) wide, until construction of the new Port Mann Bridge in Vancouver was completed in 2012. 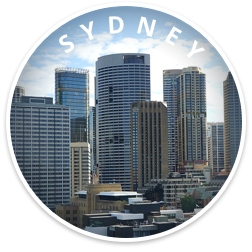 Rich in Indigenous Australian history, this diverse city is a must see for those visiting the continent.