The Temple of Hephaestus or Hephaisteion is a well-preserved Greek temple; it remains standing largely intact. It is a Doric peripteral temple, and is located at the north-west side of the Agora of Athens, on top of the Agoraios Kolonos hill.

Construction started in 449 BC, and some scholars believe the building was not completed for three decades as funds and workers were redirected towards the Parthenon. The western frieze was completed between 445–440 BC, while the eastern frieze, the western pediment and several changes in the building's interior are dated by scholars to 435–430 BC. The temple was officially inaugurated in 416–415 BC.

From the 7th century until 1834, it served as the Greek Orthodox church of Saint George Akamates.

Hephaestus was the patron god of metal working, craftsmanship, and fire. 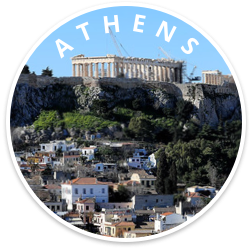