Warsaw Ghetto was the largest of the Nazi ghettos during World War II. It was established in November 1940 by the German authorities within the new General Government territory of occupied Poland. At its height, as many as 460,000 Jews were imprisoned there, in an area of 3.4 km2 (1.3 sq mi), with an average of 9.2 persons per room. They barely survived on meager food rations.

From the Warsaw Ghetto, Jews were deported to Nazi concentration camps and mass-killing centers. In the summer of 1942, at least 254,000 Ghetto residents were sent to the Treblinka extermination camp during Großaktion Warschau under the guise of "resettlement in the East" over the course of the summer. The ghetto was demolished by the Germans in May 1943 after the Warsaw Ghetto Uprisings had temporarily halted the deportations.

The total death toll among the prisoners of the Ghetto is estimated to be at least 300,000 killed by bullet or gas, combined with 92,000 victims of starvation and related diseases, the Warsaw Ghetto Uprising, and the casualties of the final destruction of the Ghetto. 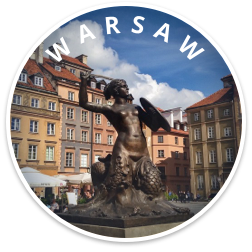