The Pantheon is considered the most well-preserved and important building from ancient Rome. It is remarkable that it stands in such glory today. Initially built in 27 BC, it was dedicated to Romulus, the mythological founder of Ancient Rome and as a temple to all gods, - the word Pantheon means “honor all Gods.”

After being damaged by fire, it was rebuilt by the Romans in 125 AD, making it nearly 1,900 years old. The ancient Pantheon boasts the world’s single largest unsupported dome, measuring 142 feet in diameter and height. When the great artist Michelangelo saw this wonder for the first time, he was said to have exclaimed that it looked “more like the work of angels, not humans.”

The structure was way ahead of its time, with the exact composition of the material still unknown, although it appears structurally similar to modern concrete. All we know for certain is that it was built in a way to withstand the ravages of time and has managed to survive barbarian raids, somehow remaining intact with its majestic splendor and grand beauty throughout the centuries.

With the rise in Christianity and abandonment of pagan gods, an altar was added in 609 AD, transforming it into a Christian church. It is still a church today, hosting mass on Saturday evenings, Sunday mornings and holy days. 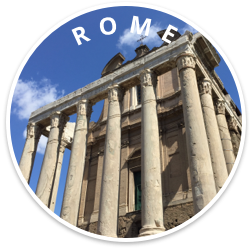